Ecotourism is a booming industry in Texas. During this hot time of the year, it’s challenging to stay cool while outdoors. Many Central Texas go swimming and more. Living in the Austin Texas area, I carry on the tradition of heading to the coast for vacations. My grandparents, Oscar and Betty Sandstrom went to Rockport Texas for vacations. But there are many options even closer for cooling off.

This weekend, my family went on a Dolphin Watch Nature Tour in Port Aransas, Texas. Bottlenose dolphins, the genus Tursiops, are the most common members of the family Delphinidae, the family of oceanic dolphin. Port Aransas is about 4 hours away from Austin and is a popular weekend get-away for Central Texans.

“Beaches offer so much more than fun in the sun. Not only do they provide vital habitat for vulnerable sea turtles and migrating birds, they serve as natural coastal buffers, protecting inland communities from storms, flooding and sea-level rise.” says Conservation International.

This remote Gulf Coast seashore is the longest stretch of undeveloped barrier island on Earth and home to some of the best birding opportunities in the country. With only one vehicle entrance at the north end of the park near Corpus Christi and just a few miles of paved roadway, the park’s untamed shores are largely undisturbed by crowds — aside from the clusters of turtle hatchlings that find safe haven there. Park staff recently celebrated the 40th anniversary of their popular public hatchling release program. If you plan a trip next year and want to watch turtle babies make their way to the ocean, you can get details on the park’s “hatchling hotline” at (361) 949-7163. 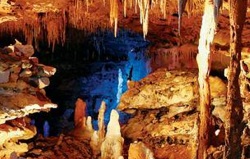 Inner Space Cavern is a limestone cave system located in Georgetown, Texas. The cave was discovered by the Texas Highway Department in 1963 during the construction of Interstate 35 just north of Austin Texas. There were several large openings to the caverns during the Ice Age, and several skeletons of prehistoric Ice-Age animals have been found in the caverns; many were trapped in the cave after they fell through the opening, unable to escape, and others drowned in thick, quicksand-like mud at the bottom of watering holes. Some filled-in sinkholes have been found, including the prehistoric entrance to the caverns. Several miles of cave passage have been surveyed, with many sections of the cave remaining unexplored, due to filled-in areas blocking passage. The constant 72 degrees is definitely one way to beat the summer heat!

Another historic natural attraction is the Barton Springs Pool. The natural pool is a recreational outdoor swimming pool that is filled entirely with fresh water from nearby natural springs. It is located on the grounds of Zilker Park in Austin, Texas. The pool exists entirely within the channel of Barton Creek and utilizes water from Main Barton Spring, the fourth largest spring in Texas. The pool has been a popular swimming retreat since Europeans first settled in the area, as its temperature hovers between about 68 °F (20 °C) and 74 °F (23 °C) year round.